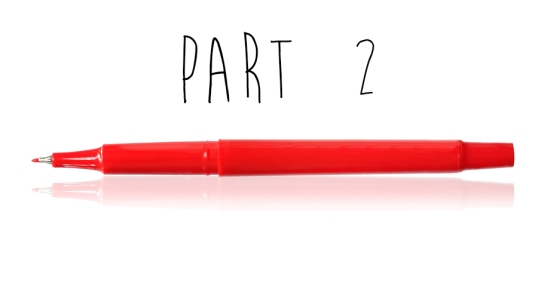 Editing. It’s so romantic. You will work with fiction authors to make their story a masterpiece. That IS what being an editor entails, right?

Aspiring editors are probably at least a little more down-to-earth than that. There’s a ton of content in today’s world, and most of it isn’t awesome fiction. In fact, most of it isn’t fiction at all. And fiction editors aren’t nearly in as much demand as ones with other areas of specialty—editors of web copy, B2B or B2C content, blogs, tech pubs, communications material, etc.

And here’s the other reality. Even if you’re the next Max Perkins, taking F. Scott Fitzgerald’s work and molding it into a thing of stunning beauty to be remembered for decades to come, it’s not your show.

Here’s what I never learned about editing, part two: it’s all about your author, and diplomacy is more than essential—it determines the success of the project.

(Note: most of this probably doesn’t apply to journalism where there’s a style in place and you’re accountable to a boss to enforce rules.)

Being Edited Can Hurt

In some circumstance or another, surely you’ve been asked to change something you’ve written. Unless you’re of a heartier stock than I am, it hurts, even if you’re not particularly attached to the material. You took the time to sit down and choose those words, one by one, to explain something or to tell some kind of story. It’s a part of you. It’s difficult when someone essentially asks you to call the time you spent, even on just one sentence, a wash. I know this from being a writer myself. Criticism of creation, even valid criticism, can be hard to take.

Side note! Writers, don’t treat an edit like a marriage: going to bed angry is a great idea. Wait out that initial resistance to be critiqued. See if you feel it’s valid after you’ve gotten some space. You’ll wake up with perspective, and you’ll either be ready to accept some truths you couldn’t accept before (that’s me) or else you’ll know the editor and you are not a good fit.

Other side note! After getting used to it, being edited is like going to a writing spa. I throw a snarl of word bedlam at someone and it comes out all beautiful and sparkly, and I didn’t even have to do any work! I love being edited.

Your First Assignment with an Author

Of course, it’s helpful to feel out what the client is looking for with a discussion first. The problem is that most people looking for an editor think they’re done and just want a quick check, but they almost always need at least a few rewrites. As I said in an earlier post, if they think they need proofing, they probably need copyediting; if they think they need copyediting, they probably need global work. An editor almost always knows better what a piece needs than the author does. The author may have vision, but they’re too close up to fulfill it by themselves.

But the reality is, at least for freelancing, that the author is the boss, and they’re hiring you to do a job they dictate, not you. In a 9–5 situation, you might have more leverage if there isn’t a time crunch. But you have to manage relationships. Even if the piece you’re handed could be amazing if you could just reshape it with total freedom, don’t give into that temptation with a new author. Every word was chosen. Maybe it was chosen carefully, maybe not. But it always will serve you well to treat those words as if they’re precious.

The first time I edit anyone, even someone who knows their piece is going to need to be ripped apart and reassembled or maybe even completely rethought, I always note even just a little thing that the person has done right. That’s done with the idea that they can take that and build upon it the next time they write. I really think that’s one of the most important services an editor can possibly provide—rather than focusing on failings to be addressed, how can we amplify their best qualities as a writer?

Next to note is this: I always use a light hand the first time I edit anyone, especially if they specifically just ask you to look for typos or if they’ve just spent a lot of time polishing it and are exhausted. Sometimes, a recommendation to revisit the entire thing is inevitable. But if you can avoid it, reserve the “this would sound better if”-type advice to the comments section or in an email. Seeing work crossed out is rough, and it shouldn’t be done more than absolutely necessary the first time you work with someone. Even if you’re tracking changes and the author has the power to just click a button and reject what you’ve done, don’t overestimate the unspoken judgement and finality of going into a document, looking at a sentence that’s troublesome but has no grammar errors, and making it clear you reject what they did and can do it better. An author will learn to trust you if they like your advice, and you can eventually get to the point where you can just rephrase.

Bottom line: always assume an author will be extremely sensitive to edits until you know otherwise. It’s a hard thing for editors, especially those editors who are meticulous or—worse—are seeing potential go unrealized. But it’s (generally) more important that the author is happy with their piece than if you’re happy with their piece.

Not Causing a Scene

Have you ever finished a long project, sent out your work, and gotten an email in response that said, “Great start!” and then listed the 40 things that you needed to fix? You don’t want to that person unless you have to be—the one who will send back a piece with way more work to be done than even before the canvas was blank.

If an author trusts me, I’ll often go into the medium itself (WordPress, Constant Contact, InDesign, StackEdit) and make my changes without tracking. That way, they can have something that’s ready to go without needing to do any more work than they have to. People are busy. But the first time you edit someone, you want to track pretty much everything.* You want them to know your style of editing—what you recommend, what problems you’re catching. You also want them to feel empowered to accept or reject things.

If a piece needs a ton of work, I’ll often send them a marked up and a clean copy, attaching the clean copy first and calling it a suggested version or something. Most people will only review the clean copy and not even really look at the tracked one. If they like it, they’ll just send you a thumbs up. No one needs to do much work after that, and if they didn’t open up the tracked changes copy, they probably never even saw how much you did.

If you do this, make certain that you maintain the author’s voice. If they read something that seems like a completely different piece, they will dive into your changes, and you’ll be in for an ongoing email chain that’s bound to be varying degrees of awkward.

* The exception is when you don’t want to send someone back an intimidating, potentially psychologically damaging document covered in red. If there’s a common comma error, I’ll track the first change, note the error in a comment, and say that the rest of the instances have been changed without the distraction of markup. Then I’ll just toggle track changes on and off as needed.

Your edits are your castle and your knowledge is your moat. Make sure you have a good one, with alligators and possibly harmful bacteria.

We were all misinformed to varying degrees about the rules of English language in grade school. For some people, that’s the last and only encounter they had with grammar. They will use their zombie rules as an excuse to go swimming in your moat.

Be friendly, and make it clear that you’ll do whatever incorrect thing they like. It’s their piece, not yours. But make your castle unapproachable for any author who values “the right way.”

That being said, this isn’t math class. In school, there’s often one right answer. In the real world, there isn’t–even when there is. Let me explain.

Don’t insist on the right way if it hinders communication or if your author says, “I understand it’s wrong, but I like it better the way it is.” Save your battles for things you feel will strongly harm a piece if it isn’t addressed. Nine-tenths of people aren’t going to notice if job titles are capitalized when they shouldn’t be. But if your client is using “supercede” instead of “supersede” and insisting on keeping an incorrect spelling, that’s pretty embarrassing for them and may hurt their attempt to be a voice of authority. You should probably point them at a source that explains that they’re wrong rather than just say, “Whatever you want!”

Authors are the bosses. Choosing to be an editor means that you’re caring for someone else’s baby. Don’t hand the baby back with a new arm and different colored hair unless that arm had gangrene and that hair was, um, plagiarized (a toupee? A baby toupee?). Once you have a relationship with the author and you know they want your full treatment, writing can more of a partnership. But you have to earn trust.

Be an awesome editor—be a flexible editor—be an editor people know will make them sound fantastic. But most importantly, be an editor that treats people’s work as if it has value, not like it’s just trash to be crossed out at will.

After all, if you can really do that much better, perhaps you’ve chosen the wrong profession…

“Kill Your Darlings,” a blog post about being edited by the very amusing Geraldine from The Everywherest