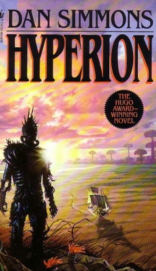 Blog post subjects over the last four years will show that science fiction hasn’t historically been my jam. I read much of Jules Verne’s works over the years, and the husband and I were putzing through the Stranger in a Strange Land audiobook. (We stopped because there was a glitch in the app we were using, and we never picked it back up–no knock on the book, really.) But that’s about where my sci-fi journey ends.

We bought Hyperion on Audible because it was a favorite of my husband’s when he was younger. The way he described it was intriguing–an involved, imaginative system of future worlds imagined by author Dan Simmons, conveyed through the personal stories of pilgrims off to see the world’s creepiest deity: the Shrike. So into the car speakers it went.

With a war that may destroy humanity on the horizon, seven people are summoned to go on a pilgrimage to see the Shrike, a giant, walking Ginsu knife set who probably didn’t get very many hugs as a child, what with the being made of sharpness and all. (Just kidding. The Shrike was probably never a child. It was never innocent.) To pass the nights on the way to see this metal nightmare, the pilgrims decide to tell their stories. Most of the book consists of the personal stories, and each pilgrim has a strange, usually sad connection to the world of Hyperion and this uber-terrifying Lord of Slicing and Dicing.

You know, the writing (other than the obnoxious use of ellipses as throat clearing) is way better that I would have thought. This is terrible of me, but I assume books that are very plot/action-centric will be designed with writing quality taking a backseat to various happenings–that, at best, writing will not get in the way of the plot. But the writing style of Hyperion was consistently elegant and creative, I thought. The dialogue could be over the top, especially in the beginning when the author was trying to establish the different personalities of the seven pilgrims. But to be fair, that’s a really hard thing to do: introduce seven characters and expect your reader to keep them straight. It was when Simmons wrote the lines for the poet that he went most over the top, but I also found the poet’s lines were the ones that most often the showcased what Simmons could do with the written word. I also think Simmons is a well-rounded reader himself. His many references to classic and contemporary lit weren’t lost on me. Much of Hyperion revolves around John Keats, and I thought that was a nice touch. Simmons’ writing did his references justice.

The characters won’t be your life-changing new best friends, but they’re decently developed and seldom cliche. All are quite serious, with the possible exception of the poet. I was quite pleased with the woman character being second on the list of most capable fighters on the quest and that Simmons made her of a stocky, muscular race.  Some of the characters are obnoxious–the poet is bawdy and full of cursing. And while the scholar is in possession of a heartbreaking story, there’s a current of pretentiousness and self-importance that runs just under the surface of all that he says. But overall, I think Simmons did a pretty good job with the people who populate his book.

I personally found the very first story the most moving (and the most horrifying). The poet’s story is fascinating as well, and so much understanding of the Shrike, the history of Hyperion, and why things are the way they are come in his chapter. The last story is a little male-gaze-y (please, make sure I’m always up-to-the-moment on the texture of the female character’s breasts), but it becomes very moving at the end. It’s also a familiar story. The cruelties of colonization is a song being played on repeat throughout history, and I think Simmons would argue that it will continue playing as long as humanity is around.

Who Should Read this Book

I don’t think you have to be a sci-fi fan to love this book. It’s a fabulous choice if you’re looking for an “escape novel,” one you’d read every night to take a break from your own life. It isn’t exactly uplifting, but reading it was a great experience.

I just adored some things about this book. One: there’s a skillfully executed mimicking of The Canterbury Tales‘s structure. Two: I thought the in medias res intro left enough to imagination but not so much that it was too confusing. Related: the way each story filled in blanks bit by bit was quite satisfying. It was generally a great device for story creation. I’m having trouble thinking of anyone who’s done this in the same way. The mini-stories themselves are all very involving and inventive.

As you saw, I have a few bones to pick with the book. But it’s really very few. As few bones as you’d have attached to your skin after the Shrike fillets you.

Salutations, literos and literas. Welcome to another edition of your favorite show, Stuff Amanda Hates! If you ask the husband, this show is on all day every day at our house, so enjoy a little piece of our life today.

So, here’s something that’s likely a familiar device:

“Can you tell me what happened before the…the incident?”

“Well, I was allowed in that bar once, but then there was some…unpleasantness” 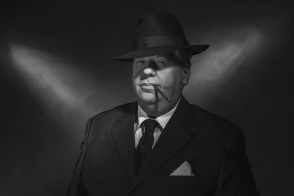 “If you don’t pay up, see, your pet hamster, he may have a little…accident.”

This technique exists for a reason in writing. The intricacies of our everyday dialogue are easy to take for granted until you try to replicate them in speech. With an ellipsis, the author want to convey maybe an awkward “ahem” as the speaker looks for a word that will soften the blow that would come from a more representative description. Or perhaps the author wants to portray a pause as a character struggles to define something that defies being boiled down to language. It might even just be used to emphasize the word that comes after the ellipsis. In any case, the ellipsis is a tool that allows authors to paint an in-text picture of what real, spoken or internal dialogue looks like.

(Hint: NO. Though I suppose that’s a more of an answer than a hint.)

It took listening to an audiobook for me to realize this isn’t realistic at all. We’re listening to Hyperion, which is a fabulous book. It’s completely unjust of me to nit pick the one thing I haven’t liked about it, so please don’t be dissuaded. But Hyperion is chalk full of this use of ellipses, especially in the section we’re listening to now—Brawne Lamia’s story, if you’re familiar. It’s used in the first paragraph (“merely…beautiful”).  It’s used 30 times in the first 12 pages of the section. I stopped counting after 30.

The sheer amount of times it’s used here is made much more obvious by listening to real humans read the text and “act” through the ellipses. And it’s here that I realized that the ellipses aren’t doing anything to make dialogue reflect real conversation patterns at all. Take this:

Read that aloud, like you’re a voice actor. Give the amount of pause you would if you were reading a script. You can hear how it’s supposed to be said, right? You’ve probably watched T.V. shows or movies that act as your instructor. Think of Spock from Star Trek. Then, think about how you’d talk to your friends about a memory that felt empty. Even if you were struggling to come up with a word, would you just leave a long, empty pause in there as you thought of the word? You would say, “the memories feel kind of, I don’t know, empty” or something similar.

Now, I’m not at all saying authors should write in all manner of vocal pauses in an attempt to make their conversations as real as possible. You edit out the cruft of everyday speech. But I’ll tell you what you probably shouldn’t do either is write in a supposed-speech-mimic device that’s actually something only employed by actors, i.e., people who have fake conversations.

Listening to the voice actors in the audiobook speak to another with these prolonged pauses struck me as unnatural at best and melodramatic at worst. I can’t think of many instances where it wouldn’t be better to apply italics for emphasis or a phrase like “I don’t know” or “[character] paused to think” to indicate struggle. Check it out my earlier examples.

“Can you tell me what happened before the, er, incident?”

“Well, I was allowed in that bar once, but then there was some”—he raised his eyebrows—”unpleasantness.”

And it’s not even necessarily that this way is more natural. It’s just less obviously unnatural, and it’s way easier reading. It’s an opportunity to be more descriptive and ignore the temptation to be lazy with language. Meanwhile, ellipses to indicate pause also draw attention to themselves and interrupt the text. Don’t take readers out of the moment!

Now, I’m not completely against the ellipses as “ahem” or “insert deeply thoughtful pause here.” You might prefer it to the tactics above, and that’s fine. Also, there are cases that I think really call for it. Take this, out of the same section in Hyperion, when Brawne has been asked to call another character by his first name:

“Yeah, M…ah, Johnny, most of my work falls under that category”

Like its friends the exclamation point, the cliche, and other potentially obnoxious devices, the ellipsis should be used very, very sparingly—if at all.