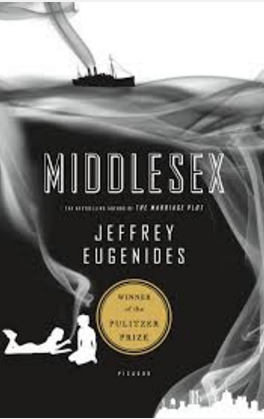 An intersex male-identifying protagonist describes a family history from his grandparents up to the present, featuring his current life events.

Wow, I can’t believe that long, winding, beautiful book can be summed up in a single sentence.

Eugenides is funny and easy to read. Yet there’s a literary voice and knowledge of device that differentiates his book from a comedian’s journal. He combines the ancient with the modern (which, incidentally, is a huge theme in the book) by using turns of phrase found in the literature of Greek antiquity to describe his story. And his writing packs a punch right from the beginning. He starts with “I was born twice.” (What!? So good!)

Here’s the introductory sentence in its entirety:

“I was born twice: first, as a baby girl, on a remarkably smogless Detroit day of January 1960; and then again, as a teenage boy, in an emergency room near Petoskey, Michigan, in August of 1974.

Now this is the way to start a book.

Eugenides had something going on in Middlesex that I at first wanted to call a giant hole in his writing abilities, and that was the treatment of a first-person perspective as omniscient. If you can’t quite recall all the terms from your junior high reading courses, that just means that he was writing as an “I” but saying things an “I” couldn’t possibly know–what other characters were thinking, exact conversations that were had while he was in the womb. But he addressed this in the most interesting way. He portrayed himself as actually being the mutation lying dormant in the bodies that came before him, allowing him to be present at all previous events through ancestors. This suits the novel so well, since so much identity comes to him through not just his Greek heritage and family values, but also the gene that makes him who he is.

–And now, a quick break for who he is–

Here’s a quick rundown of the non-cis-gender identities, as best I know. (This was probably the best source I found.) I needed a primer, so maybe you do, too. Please, anyone, correct me if you find these to be wrong, and I’ll update.

Transgender–Umbrella term for those who don’t feel the gender identity assigned to them at birth reflects who they really are. (See Caitlyn Jenner, or better yet, read the awesome letter from Lilly Wachowski of The Matrix fame)

Transsexual–sometimes used to describe a transgender person that has chosen to make biological changes via hormone therapy or surgery. The term is becoming passe and is, frankly, a little personally invasive.

Intersex–Formerly “hermaphrodite” (a etymologically misleading word not really used anymore), this means that a person was born with ambiguous anatomy. Cal from Middlesex is intersex. When born, he appeared to his half-blind doctor to fully female and was raised as such. A closer look would have shown some anatomy to be atypical, and he carried an XY chromosome pair–the set used to classify humans as male.  See here for more detail, or just read the book. The narrator is very open about what’s going on.

Note: none of these things have anything to do with what gender an individual is attracted to. That’s something else entirely.

Another thing that really makes the writing in this engaging is that the author communicates so well about things that not many people understand. The description of Cal growing up and trying to understand bodies and attraction and identity brings to life a kind of struggle many people could never imagine. I couldn’t.

Eugenides also puts within reach the kind of things that happen slowly and are therefore hard to pinpoint: the development of superstition, the attitudes toward race, the slow decay of love. I feel like I look around at the people around me sometimes and think, “How did you even get to this place?” But after reading Middlesex, I don’t know…it’s just seems easier to understand things that happen even around me, outside of the book’s scope.

Cal is a beautiful, empathetic narrator. He’s the perfect person to tell the story of the family. He does so with such humor and compassion, and you never quite forget that it’s him talking, but he never takes you out of the story. Cal himself builds up to his own life–he doesn’t become a major part of the action until the end–but you feel very much as if it’s him telling you a story the whole way through.

Desdemona and Lefty are fleshed out characters that live full lives, though their marriage is kind of sad and their stories are a bit tragic. I don’t know that either is exactly likable, but you feel like you know them and their struggles, especially Desdemona’s old world superstition and Lefty’s pull away from Desdemona and toward the excitements he remembers from youth.

Cal’s parents are less remarkable. Their courtship is, well, interesting. But neither character really seems developed. The mother is especially unmemorable, and if it weren’t for Milton’s notable racism, he wouldn’t stand out, either. The section that focuses on them is the lowlight of the book.

The magic of this book is that it deals with so many issues at once without becoming lecture soup. I mean, gender identity, immigration, Greek culture, family dynamics, racism, religion, war, incest–it’s all covered. But none of it is sermonizing. It’s all just part of the story.

My favorite two parts were near the beginning, with Lefty and Desdemona growing up, and near the end, when Callie spends her days with who she calls “the object.” Both parts left me enraptured. The middle of the book is a little bloaty, but nothing that didn’t stop me from going straight for the next book. (I picked up the Virgin Suicides, which is so far wonderfully written but lacks the humor of Middlesex.)

Who Should Read the Book

This is hard. I want to say everyone will like it, but that’s probably naive of me. If you like coming-of-age stories or stories about families, this will probably tickle you. If you like feeling like someone you know is telling you a story when you read a book, this may be up your alley. But if you like fast-moving, action heavy plots, this isn’t probably your speed. It’s long and, at times, slow going.

You will probably know whether or not you like the book in the first few pages. The writing style is clearly established early on, and the type of characters you’ll meet are met quickly.

This was a very bright spot in my Pulitzer journey. I loved the whole experience of reading Middlesex. It’s pretty clear to me that this won the Pulitzer because of its treatment of social issues (being born different, issues of prejudice), it doesn’t hurt that the writing is fantastically entertaining and entirely pleasing.

One response to “Middlesex: Overview”