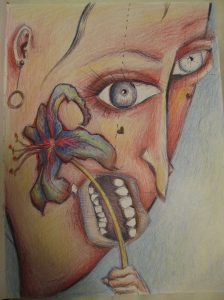 I was just moseying through some old pictures, and I came across this one. It’s one of my favorites.  I called it “Ophelia,” after the scene in Hamlet where the supposedly crazy Ophelia goes so supposedly crazy. She’s throwing out flowers and slights left and right, knowing the veil of madness will allow her to express all she’s keep silent. But one needs to know a bit about floral/herb symbolism and history to really know where she’s getting with all that. In many ways, she’s probably getting nowhere (except where the essay-writing English 102 student chooses for her to be getting). But in one particular instance, I don’t know how else to read it except 1. she’s not crazy, and 2. she’s a baby momma and, oh boy, does that spell trouble for her.

She speaks outright about a few things–rosemary for remembrance, pansies for thought. Fennel and columbines are thrown about, and many people argue fennel symbolizes flattery. That can mesh well with the plot, considering the treatment of Claudius. But the thing about symbols, especially ones that have been around for a while, is that they can also mean a lot of other things. Fennel can symbolize victory, though there is a bitter variety of fennel (the bitter victory of Claudius?). It can improve eyesight, which is certainly something that, symbolically, a variety of people in Hamlet could use. One of the most telling symbolic uses of fennel is in Greek mythology. According to everyone’s favorite academic source, Wikipedia, Prometheus used a stalk of fennel to steal fire. And if we’re going to talk about thievery, there’s certainly a place we could go with that in Hamlet. (Hint: it involves crown- and life-stealing.)

Problem is (plug your ears, 102 students), fennel can also mean, well, whatever it is you want it to mean. Longevity? Courage? Strength? Sweetness? Stomach ache fixer? Pesticide? Toothpaste? (That last link says the plant is “erect,” too, so do your part and don’t let any Shakespeare scholars follow that link, or–poof!–every annotation in Act IV, Scene 5 of all modern prints of Hamlet will be all about the erect fennel.  You know how much all those dirty old critics love this stuff. All other possible meanings will be thrown to the wind in light of this new, extremely mature discovery.)

The columbine is the same way. Just this one site talks about it being symbolic of foolishness, the holy spirit, innocence…so, you know, whatever. Whatever creates you the best essay, English 102 students–that’s what these flowers and herbs mean.

Except rue. Rue means Ophelia is pregnant. And that’s it.

…that Ophelia could indeed be pregnant, despite how chaste everyone believes pre-women’s-lib ladies to be. Why might Ophelia give herself the plant rue–meaning feel rue, regret,–for making this choice? Well, her boyfriend has been pretty rude to her lately. Also, he just kind of took off, and it was clear things weren’t going well between them before he took off. He killed her dad, and that’s a pretty big deal, but we don’t have a lot of reason to believe that Ophelia and Polonius had the most beautiful father/daughter relationship. Nonetheless, it’s disturbing. Upsetting. Might make you rue your choice to give yourself freely to such a regrettable partner.

But rue your decision to the point of suicide?

Suicide means you see no way out. What position could Ophelia be in that made her feel trapped enough to pursue death? What made her so terrified of the future? And why would the only plant she reserved for herself be the one with the most well-known use being that it had powerful abortifacient properties? (Yes, your favorite academic source, Wikipedia.)

But would Ophelia had known about these powers of the rue plant? Well, Ophelia was a resident of the palace, and would have been as educated as a woman of the time could expect to be.  Pliny the Elder (23 AD-79 AD) and Soranus of Ephesus (1-2 century AD) had claimed it could induce abortion, and these folks certainly predate Hamlet’s setting.

In my opinion, there’s not a lot of other ways to see this one. Unless you just want to argue that Ophelia was crazy and therefore killed herself from an overabundance of crazy. Or she died accidentally because…crazy. And if that’s your argument, that’s cool, English 102 student. But your teacher thinks your straightforward reading of the play boring and uninspired. She likes my picture, though, so print that out and include it with your essay.

Also, if you’re a parent and you would like to expose your children to excessive portrayals of death early on, let me recommend this Wikihow site that will show them how to make a delightful Hamlet puppet for their Hamlet puppet show. Here are some of the highlights:

Cut out two pair of 2-by-2-inch eyes for Hamlet. Paint one pair of eyes calm and natural. Paint the second pair of eyes thin and angled downward to indicate his seething rage.”

You can’t make this stuff up.